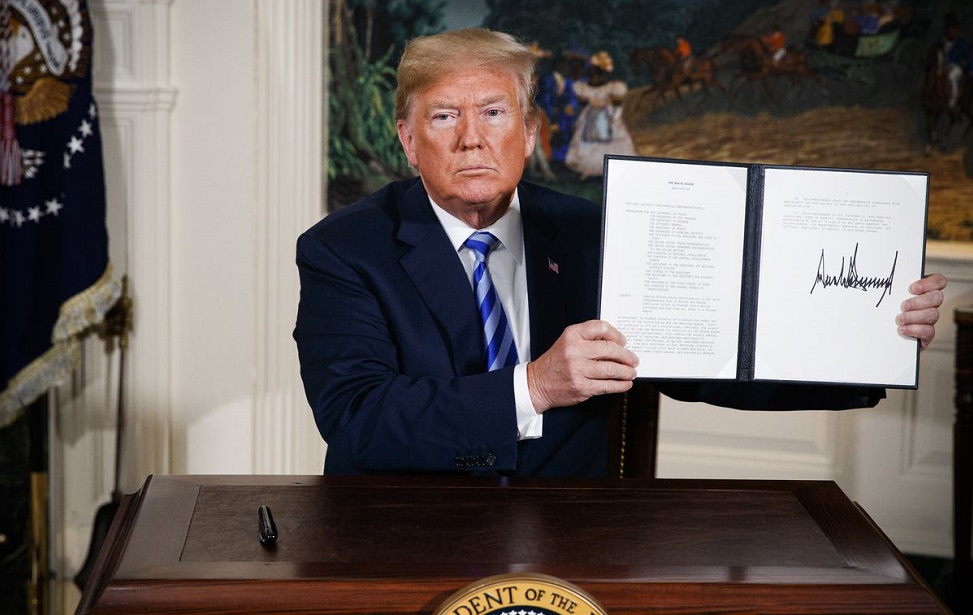 One of the most contentious decisions taken by President Trump is the withdrawal from the Joint Comprehensive Plan of Action (JCPOA), colloquially known as the ‘Iranian nuclear deal’, and the re-imposition and possible expansion of nuclear-related sanctions on 8 May 2018 and 5 November 2018. Those actions have been criticised by the other members of the 5 1 negotiation group, as well as the international community and individuals such as the Human Rights Council’s Special Rapporteur on the negative impact of the unilateral coercive measures on the enjoyment of human rights.

In order to analyse the US decision from the perspective of international law, the basis of the US withdrawal from the JCPOA should be assessed. These bases were mentioned and enumerated by the Agent of the United States, Ms. Jennifer G.Newstead, during the oral observations of the US in the proceedings of hearings for the indication of provisional measures, particularly in paragraphs 4 and 5 of the US first observation.

According to the argumentation presented by the US Agent, the core reason behind the US discontinuation of the JCPOA and the re-imposition of extra-territorial sanctions is the development of Iran’s nuclear-related program. In the following paragraphs, I will give a critique of this position based on arguments from international law.

1. Responsibility of States for their Obligations under International Law

The UNSC Resolution2231 is a binding decision for the UN Member States, even if the JCPOA, on which it is based, is a non-binding political commitment. Therefore, Member States should respect it and act in good faith, as stated in paragraph 46 of the ICJ argument in judgment of 20 December 1974 in Nuclear Tests Case (Australia v France). More generally, article 2(2) of the UN Charter provides that “[a]ll Members, […] shall fulfil in good faith the obligations assumed by them in accordance with the present Charter.”

Having reached an agreement on Iran’s nuclear-related program, the former US President Barack Obama issued Executive Order 13716 of January 16, 2016, which revoked Executive Orders 13574, 13590, 13622, and 13645, and amended Executive Order 13628 as a practical step to comply with the JCPOA. Contrary to his predecessor and the obligations made under the JCPOA, president Trump withdrew from the JCPOA, re-imposed extra-territorial sanctions, threatened other countries to halt their economic relations with Iran, and threatened Iran with more extensive sanctions. However, Barack Obama issued a statement in which he indirectly mentioned a fundamental pillar of international law called the ‘continuity of rights and obligations of successor states or governments’, according to which “changes in the form of government of one state, such as the replacement of a monarchy by a democratic form of government, do not modify or terminate the obligations incurred by the previous government”. Given that this principle applies to two different types of States or governments, a fortiori it must apply to two governments in one State which serve under the same constitution. Consequently, the Trump Administration is the continuation of Obama Administration under theUS constitution. Therefore, the new administration is responsible for the promises and obligations made under international law by the former administration.

As reflected in the Draft Articles of Responsibility of States for International Wrongful Acts(chapter II, para. 7), “the State as a subject of international law is held responsible for the conduct of all the organs, instrumentalities and officials which form part of its organisation and act in that capacity, whether or not they have separate legal personality under its internal law”.

Every entity or individual who decides to have commercial relations with Iran would be a subject to US sanctions regimes regardless of whether they are American or non-American. Indeed, the US not only withdrew from the JCPOA, but also coerced the rest of the world to halt their financial and economic ties with Iran. In fact, commercial relations with Iran are prohibited by the US on the basis of the United States’ national security policy, not on the basis of internationally recognised and accepted mechanisms such as sanctions under chapter VII of the UN Charter. According to article 3 of the Draft Articles on Responsibility of States for Internationally Wrongful Acts, “[t]he characterisation of an act of a State as internationally wrongful is governed by international law. Such characterisation is not affected by the characterisation of the same act as lawful by internal law”. Therefore, the US could not invoke its national security policy to impose extra-territorial nuclear-related sanctions against Iran.

Because the US course of action has no legitimate basis in international law, it is an act of intervention prohibited by the article 2(4) of the UN Charter. The ICJ has acknowledged the principle of non-intervention in several cases including the judgment of 27 June 1986 in the Case Concerning Military and Paramilitary Activities in and Against Nicaragua (Nicaragua v UnitedStates of America) in which the Court recognised the principle of non-intervention as “the right of every sovereign State to conduct its affairs without outside interference” (para. 202).

Whilst the US forces other governments to obey its sanctions against Iran, the agent of the US in the ICJ in paragraph 7 of the US first observation condemned Iran for bringing its claim to the ICJ and asking for provisional measures, since in the view of the US, Iran’s legal manoeuvrings are against the United States’ sovereign right to take lawful measures in defence of its essential security interests.

The United States has repeatedly used its sheer economic power as leverage for imposing its intentions on other countries and international and regional organisations. Regarding Iran’s case, the US has used this leverage tore-impose the extra-territorial sanctions. This act of the US is contrary to the provisions of the Charter of Economic Rights and Duties of States, most notably as reflected in Articles 1, 2, 4, 8, 11, 14, 24, 26, and 32.

These US actions, directly and indirectly, have not only violated Iran’s rights under the Charter of Economic Rights and Duties of States, but have also disrupted the rights oft hose States which have benefitted from dealing with Iran. Besides, article 32of the UN Charter expressly declares that “no State may use or encourage the use of economic, political or any other type of measures to coerce another State in order to obtain from it the subordination of the exercise of its sovereign rights”.

The US is among those leading, pioneer States who helped to establish the United Nations and the post-war global order. The US is a permanent member of the UN Security Council which have “primary responsibility for the maintenance of international peace and security”. Therefore, as an originator as well as a supporter of the UN, and a permanent member of the UNSC, being in compliance with the principles of the UN Charter and UN System should be a prerequisite for the US administration.

The US withdrawal from the JCPOA and the re-imposition of nuclear-related sanctions without any rational and legal justification, contrary to its commitments under the JCPOA, is entirely against its obligations flowing from the principles of international law and the provisions of the UN Charter, such as article 25 according to which “[t]he Members of theUnited Nations agree to accept and carry out the decisions of the Security Council in accordance with the present Charter.”

Because of its reconfirmation in UN Security Council Resolution 2231, the JCPOA is a binding document not only for Iran and the 5 1, but for the all member of the international community. By ignoring this Resolution or any other Resolutions issued by the UNSC and making other countries follow the same process, the US is ignoring the UNSC itself as well as principles and rules of international law.