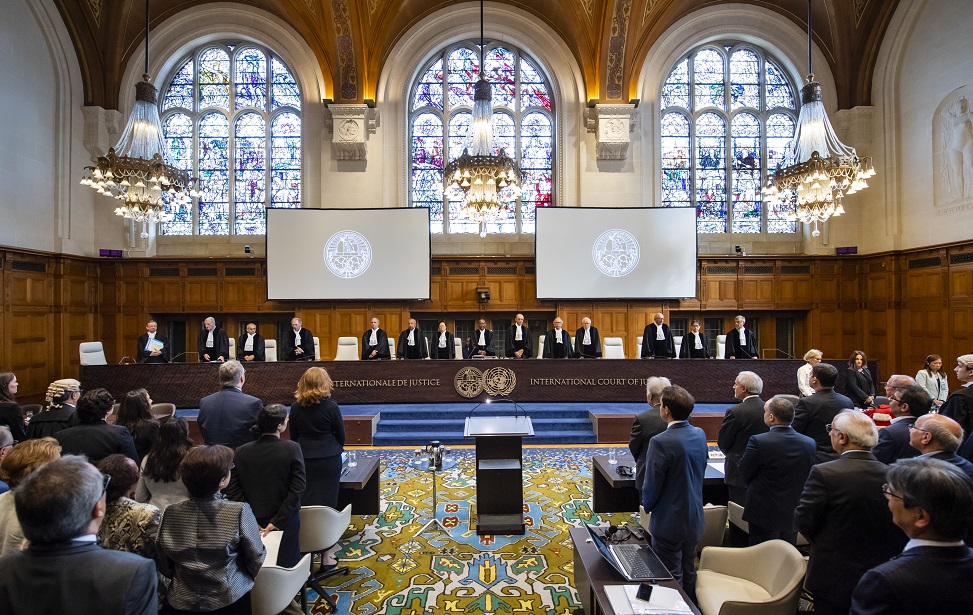 On the 3rd of October 2018, the International Court of Justice laid down its judgement in the case of Islamic Republic of Iran v United States of America. The decision came in response to an application by Iran for the indication of provisional measures relating to alleged American violations of the 1955 Treaty of Amity, Economic Relations, and Consular Rights between the two states.

The case arose out of the United States’ withdrawal from the Joint Comprehensive Plan of Action (JCPOA), the multilateral agreement between China, France, Germany, the Russian Federation, the UK, the US, and Iran, which concerned Iran’s nuclear programme and the international sanctions imposed upon the state since 2006. Following its withdrawal from the JCPOA, the United States announced the re-imposition of various economic sanctions on Iran, including sanctions on financial transactions, the export of commercial passenger aircraft and parts, the importation of various Iranian goods, and trade in metals. In its application to the Court, Iran alleged that these measures were violations of the 1955 Treaty between the two states, and in particular Articles IV, VII, VIII, IX, and X, which in effect provide for freedom of commerce between the two states and prohibit the imposition of economic restrictions that are not comparable to similar restrictions imposed upon third countries (ie states not party to the Treaty).

The United States denied that the Court had jurisdiction to adjudicate the dispute, and maintained further that, in any case, its actions were not in violation of the Treaty since its announced measures relied upon the exclusionary provision in Article XX paragraph 1. This Article sets out certain exceptions to the Treaty’s provisions on freedom of commerce. First, it provides that the terms of the Treaty would not preclude the application of measures by either party “relating to fissionable materials, the radioactive by-products thereof, or the sources thereof”. Second, it provides that the Treaty would not preclude the application of measures “necessary to fulfil the obligations of a High Contracting Party for the maintenance or restoration of international peace and security, or necessary to protect its essential security interests”.

The case was significant for several reasons. It provided the Court with its first real opportunity to address the pressing issue of ‘economic warfare’ and to develop principles of international law in this area. Moreover, it clearly stood as an important test of the United States’ relationship with the Court and other institutions of international law. It came shortly after John Bolton’s attack on the International Criminal Court, in which he threatened to impose sanctions in response to the ICC’s considering the prosecution of US military personnel over alleged detainee abuse in Afghanistan.

A ‘provisional measure’ of the ICJ is essentially equivalent to an interim order or injunction. Four conditions must be satisfied for the Court to be entitled to indicate provisional measures in relation to some dispute: (1) the Court must have prima facie jurisdiction over the merits of the case; (2) the rights asserted by the Applicant State on the merits must be plausible; (3) there must be a real and imminent risk of irreparable prejudice to the rights of the applicant state pending the settlement of the dispute; and (4) there must be a link between the measures requested and the rights claimed by the applicant state.

The United States denied that the dispute was related to the interpretation of the 1955 Treaty and submitted that the Court therefore lacked jurisdiction to rule on the matter. It argued that the dispute arose in the framework of the JCPOA rather than the 1955 Treaty, and further that the imposed measures would, in any event, come under the Article XX exceptions and fall beyond the scope of the 1955 Treaty. The Court rejected these arguments. It pointed out that an act may fall within the ambit of more than one legal instrument. Accordingly, to the extent that US sanctions following its withdrawal from the JCPOA might constitute violations of its obligations under the 1955 Treaty, such measures would necessarily relate to the interpretation of that Treaty Moreover, whether the United States lawfully relied upon the Article XX exceptions was itself a question of interpretation of those Treaty provisions and consequently fell within the prima facie jurisdiction of the Court.

The issue of ‘plausible rights’ constituted perhaps the most significant element of the judgement. The Court found that some of the rights asserted by Iran under the 1955 Treaty were plausible. In particular, those that are related to the importation and purchase of goods required for humanitarian needs, such as medicines and medical devices, food and agricultural commodities, and goods and services necessary for civil aviation. Crucially, the Court rejected the United States’ invocation of the Article XX exclusions in relation to these measures. It concluded that Iran’s rights in relation to the importation of goods necessary for humanitarian needs could not plausibly be construed as falling within the ambit of the “essential security interests” of the United States or as being directly related to “fissionable material”. For this reason, these rights would not be covered by the Article XX exclusions.

The separate opinion of Judge Cancado Trindade further elucidates this element of the Court’s decision. Drawing on previous judgements and opinions, he suggests that the Court’s duty is to apply principles of international law and not to be “obfuscated by allegations of national security”. Indeed, he forcefully expresses the view that in the present case “the Court should have been far more attentive to international security than to State susceptibilities as to their own ‘national security’ interests or strategies.”

Imminent Risk of Irreparable Prejudice and Link to Measures

The Court dealt fairly swiftly with the remaining two conditions. The imminent risk of irreparable prejudice to the rights claimed by Iran could be established on the grounds that the measures taken by the United States had already begun to have an impact on the import and export of goods between the two states as well as financial transactions between them. While the importation of humanitarian goods was in principle exempted from the measures announced by the United States, in practice, those measures have made it more difficult for Iran, Iranian companies and nationals to engage in the financial transactions that would allow them to purchase such goods. This meant that the imposed sanctions risked exposing Iranian nationals to serious threats to health and life. Moreover, there was a clear link between the provisional measures requested and the plausible rights arising from the 1955 Treaty whose protection was being sought by Iran.

The Court unanimously concluded that the United States was required by the Treaty to remove, by means of its preference, any impediments to the free exportation to Iran of medicines and medical devices, foodstuffs and agricultural commodities, as well as goods and services necessary for the safety of civil aviation.

The response from the United States was swift and damning. The Secretary of State announced within hours that the US intended to terminate the 1955 Treaty with Iran. Under Article XXIII of the Treaty, it is entitled to do so by giving one-year written notice. This means that, in principle, it will remain subject to its obligations until its effective withdrawal. Non-compliance with the provisional measures indicated by the Court nevertheless seems to be inevitable.

The Court has, in this judgement, adopted an assertive stance towards ‘economic warfare’ of the type pursued by the United States against Iran. Its restrictive interpretation of the Article XX exclusionary provisions under the Treaty indicates an unwillingness to defer to the invocation of ‘national security interests’ in the face of serious humanitarian considerations, settled principles of international law, and considerations of international security. The Court made it clear that unilateral economic sanctions which could hinder access to essential humanitarian goods could not plausibly be construed as measures adopted in defence of national security interests. This reasoning could suggest a disposition to look with some scepticism at sweeping economic sanctions of this kind, which have historically had devastating consequences for civilian populations.

The implications of the Court taking this position may be grave. The United States’ response threatens a further slide into unilateralism and generalised disregard for the Court and other international institutions. State non-compliance with obligations of international law, especially in politically contentious areas such as this, appears today to be the rule rather than the exception.

Nevertheless, Martha Nussbaum has recently made a compelling argument to the effect that the various institutions of international law operate most effectively as originators of persuasive norms to be enforced through domestic political processes, rather than as sources of enforceable law in the strict sense. The Court’s decisions, on this view, stand primarily as statements of normative principle. These principles, in turn, confer legitimacy upon certain political practices and create taboos around others. Though short-term noncompliance by the United States is almost inevitable, perhaps this and other judgements of the Court will have an impact on the terrain of domestic political discourse. If nothing else, the decision places the issue of economic warfare squarely on the international political agenda, and raises pressing questions about its relationship to human vulnerability.