Commentary-The Iranian Suit against the US Sanctions and the 1955 Treaty of Amity: Brilliant Plan or Aberration? 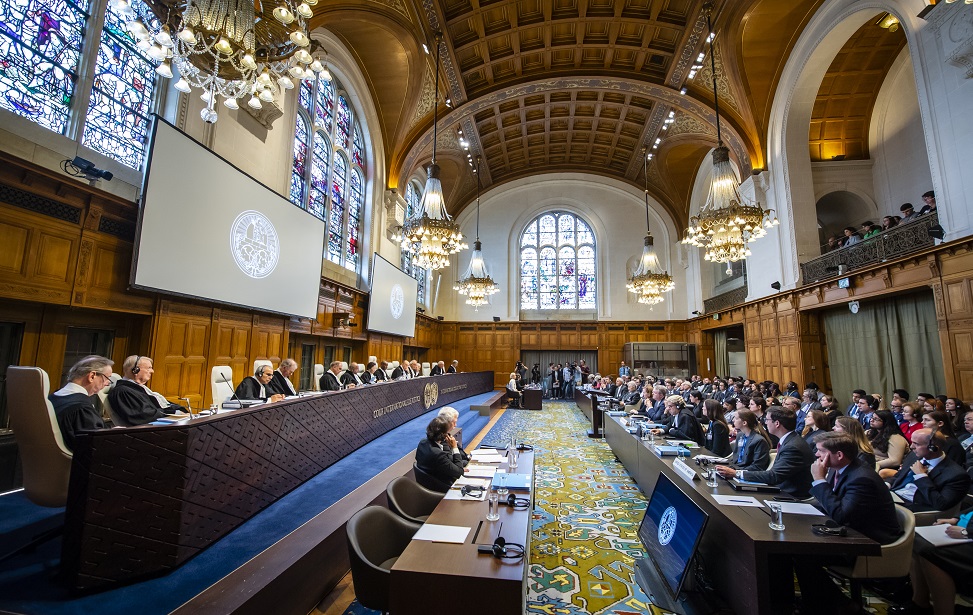 The Iranian economy is already feeling the effects of the United States economic sanctions that are successively being reinstated following the US withdrawal from the Joint Comprehensive Plan of Action (JCPOA) on 8 May 2018. In an attempt to save what can be saved, Iran seized the International Court of Justice in July requesting the latter to order and declare that the 8 May and subsequent sanctions are unlawful; that the United States shall stop its threats with respect to the further announced sanctions and that it shall compensate Iran. The claim is accompanied by a request for provisional measures by which Iran seeks to obtain, in particular, the immediate suspension of the sanctions and the non-implementation of the sanctions announced. Last week, both parties met in court for the hearings on the provisional measures request.

Iran has not claimed a violation of the JCPOA but alleges breaches of the Treaty of Amity, Economic Relations, and Consular Rights signed by Iran and the United States in 1955. The reason is simple: neither Iran nor the United States accepts the compulsory jurisdiction of the ICJ, both states having withdrawn their optional clause declarations. A compromis not being in sight, Iran can only ground the ICJ’s jurisdiction on a compromissory clause. While the JCPOA does not contain such a clause, the Treaty of Amity stipulates in its Article XXI (2) that “[a]ny dispute between the High Contracting Parties as to the interpretation or application of the present Treaty, not satisfactorily adjusted by diplomacy, shall be submitted to the International Court of Justice, unless the High Contracting Parties agree to settlement by some other pacific means.”

The case, and the provisional measures request, raises many interesting questions, including  for example, whether the mainly economic damages alleged by Iran are irreparable as is required for the indication of such measures, and whether the request could possibly pre-empt the decision on the merits. However, this post is uniquely concerned with whether the idea to rely on the Treaty of Amity helps overcome the hurdle of jurisdiction. While the existence of jurisdiction need only be proved prima facie in the provisional measures phase, the Court will at a later stage have to take a definite decision (assuming the case is not dismissed for manifest lack of jurisdiction at the provisional measures stage). One of the most problematic issues is whether the dispute is about the interpretation or application of the Treaty of Amity despite the existence of the JCPOA. If this is the case, invoking the Treaty of Amity was a smart move by Iran.

The Iranian idea can potentially be attacked in two places: the actual scope of the application and the request, as well as the potential inapplicability of the Treaty of Amity.

Is the case in reality a dispute on the JCPOA?

Professor Pellet, representative of Iran, spent a lot of time in his pleading on the provisional measures request explaining that Iran neither asks the Court to adjudicate on the US withdrawal of the JCPOA, nor that it invokes violations of the JCPOA itself, but that it only refers to the reintroduction of sanctions and breaches of the Treaty of Amity. According to him, if the JCPOA is of some relevance to the case, it only forms the “context” in which the contested sanctions were adopted (Verbatim Record, 2018/16, p. 30). The counter-argument of the United States is two-fold: First, the Iranian application and request do refer to the JCPOA by seeking the termination of “the 8 May sanctions that the USA previously decided to lift in connection with the Joint Comprehensive Plan of Action” (Application, para. 2). Second, the Iranian claim would eventually come down to enforcing the JCPOA through the ICJ jurisdiction: “This is in fact a dispute about the JCPOA”, the Treaty of Amity being “simply a device in Iran’s search for a jurisdictional basis” (Verbatim Record, 2018/17, S. 13 f, 25).

The US arguments are not necessarily persuasive. As regards the first part, both parties agree that the Court itself determines the true object of the dispute (see ICJ, Nuclear Tests, New Zealand v. France (Judgment), para. 31). While giving particular attention to the formulation chosen by the applicant, the Court does not confine itself to that formulation (ICJ, Fisheries Jurisdiction, Canada v. Spain (Judgment), para. 30). It is true that the 8 May sanctions are, in terms of fact, closely linked to the US withdrawal from the JCPOA. However, it is not clear why this should make the case a dispute about the obligations stemming from that agreement as long as only breaches of the Treaty of Amity are invoked. A finding that Iran is in fact requesting the Court to declare breaches of the JCPOA would amount to changing the object of the application rather than specifying it. The second branch of the US argument – the case’s outcome would amount to enforcing the JCPOA – appears no less difficult to accept. If, before the conclusion of the JCPOA, Iran had claimed that the US sanctions violate the Treaty of Amity, no-one would have doubted the dispute being about the application of this treaty. However, a dispute that as such relates to a certain treaty does not become the exclusive matter of a different agreement by the sole fact that the applicant’s request, if successful, would eventually arrive at the same result as if the latter agreement were put into effect. The US argument ignores that there can be different legal norms that, when applied, reach the same result and that in principle, the applicant may choose between them.

Is the JCPOA a lex posterior or specialis to the Treaty of Amity?

Things would be different, however, if it should turn out that the JCPOA precludes the applicability of the Treaty of Amity to all issues that are governed by the 2015 agreement. Were this to be the case, the fact that Iran only invokes breaches of the Treaty of Amity would not change the fact that the dispute would not be about the interpretation or application of the latter Treaty, since that treaty would be inapplicable. However, the United States has not, at least not explicitly, framed its argument that way.

There are two rules that could potentially be used to argue that the JCPOA takes precedence over the Treaty of Amity: the lex posterior and the lex specialis rule. Let us assume for a moment that the JCPOA (since the adoption of Security Council Resolution 2231) contains legally binding obligations. In that case it would seem persuasive to argue that the JCPOA, signed by Iran and the United States in 2015, is firstly a subsequent agreement to the Treaty of Amity, with the former precluding the applicability of the latter when the obligations under the two agreements conflict with each other. Accordingly, Iran would not, in this scenario, be able to claim a violation of the Treaty of Amity by the United States for not lifting unilateral sanctions earlier than required by the JCPOA. Similarly, the JCPOA might be considered as an agreement by which the parties established a more specific regime on the lifting and the possible reintroduction of sanctions compared to the more general rights and obligations arising from the Treaty of Amity. If that were so, Iran would not be entitled to invoke a breach of the Treaty of Amity with regard to measures permitted by the JCPOA.

However, the United States, by reintroducing those sanctions, has not acted in accordance with the JCPOA. (This is true irrespective of the binding nature of the agreement as it did not provide for unilateral exit. If one regards the agreement as non-binding, the withdrawal is simply not a breach of a legal obligation). The relevant question is therefore whether the JCPOA precludes the applicability of the Treaty of Amity also with regard to behaviour that does not comply with the former. This seems doubtful. As the United States itself has emphasised during the hearing, the dispute resolution mechanism provided by the JCPOA is limited to political channels. It is unlikely that Iran, by signing the JCPOA, intended to waive its rights stemming from an earlier treaty that, contrary to the JCPOA, provided for a legalenforcement mechanism in the event that the United States does not feel bound by the obligations arising from the JCPOA.

In any case, in order to potentially take precedence over the Treaty of Amity, the JCPOA must be legally binding. A non-binding agreement cannot create an exclusive regime precluding a party from invoking an earlier international treaty with binding effect. This might be the reason why the United States which continues to contest the binding nature of the JCPOA has so far not explicitly opted for the lex specialis or lex posterior avenue. Interestingly, if the Court decides to consider the possible preclusion of the Treaty of Amity by the JCPOA, it may incidentally need to take a position on the very disputed nature of the JCPOA (for the conflicting views see here and here). This, however, raises the interesting question to which extent the Court has the competence to incidentally treat matters that do not fall within its jurisdiction – an issue that cannot be  dealt with here in any detail (but on which see Proelß, Hitotsubashi J. L. & Pol. 46 (2018), p. 47 (50-56) with respect to UNCLOS tribunals).

Iran’s idea of invoking the Treaty of Amity, however curious it may sound, should hold water. The case is not in reality a dispute about the JCPOA, nor does the latter exclude the application of the Treaty of Amity. Apart from these issues, the Court will have to address other arguments the United States has advanced to contest jurisdiction. These include the question of whether the national security exception in Art. XX (1) (d) of the Treaty of Amity potentially precludes the applicability of the treaty (and not only its substantive obligations) and whether Iran has made sufficient diplomatic efforts to meet the requirements of the compromissory clause. The Court’s order on the Iranian request for provisional measures may be an indication of whether it will accept jurisdiction for the main claim. Iran is hoping for a decision before the next wave of US sanctions is implemented on November, 4. The following weeks will therefore prove important for David’s battle against Goliath.